Wednesday was not more exciting around here than Tuesday or Monday, except that Paul worked from home because the van was in getting serviced and after lunch we went together to pick it up so one of us could drive it home. (I feel like I was so spoiled the last couple of weeks with so much going on that now I read as very boring.) Also the laundry is folded and I may have been watching The Avengers featurettes while doing that (Whedon always sounds so full of himself to me, but the cast is just so much fun). There were baby bunnies out on both cul-de-sacs and irises too!

It was a season finale night! I watched Arrow to see The Flash (can I call him Barry here or is that a spoiler?) but since I didn't watch most of the season I was a little lost on several points. But look, John Barrowman! And it passed the Bechdel Test, which is more than I can say about most shows I watch most weeks! Then I watched Nashville, where I loved Will's storyline but was disappointed with most of the womens' -- bet you anything the end was The Character We Don't Care About and not The Character We Do Care About. Rawlings Conservatory fairy house exhibit: 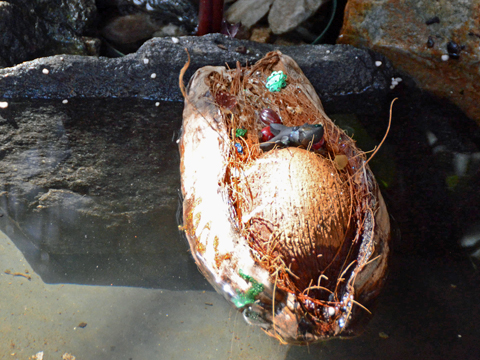