On Thursday I had to admit that I may inadvertently have fed my cats very, very late at lunchtime. Apart from that, it was a very calm day. I did a bunch of work and chores, enjoyed the magnificent cool weather, talked to neighbors, went looking for bunnies (just one baby today), and WON PUBLISHER'S CLEARING HOUSE! (if they pick my number on whatever day in June they are picking numbers, and if I actually submit the thing).

We watched the season finale of Elementary, which I did not love apart from Joan being entirely competent in Sherlock's absence; it felt manipulative, like they wanted to maneuver Sherlock into a certain place at the start of next season and couldn't come up with a really logical reason for him to be there. Jon Stewart's tribute to David Letterman was much better. Here are some photos from the National Zoo in April with Rachel: 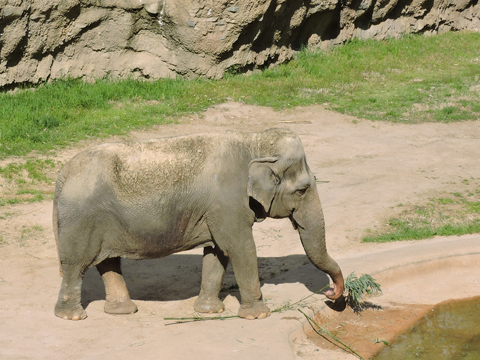