It was beastly hot on Saturday but that did not affect me much: we spent the afternoon at Jurassic World and the evening going out to dinner in Virginia with a friend and her family, both of which were extremely enjoyable. Jurassic World manages to combine the best aspects of a remake and a reboot -- I love that it's a sequel, not a reimagining, even if that means the sexual and racial politics are not much improved from the original. I also love Chris and Bryce's chemistry although Chris and the raptors' chemistry is kind of more interesting.

In the evening we went to Crystal City to have Ethiopian food at Enjera, where we met Laurie, Hal, and, among other members of their family, their daughter who's moving to the area. I'd never been there before and the food was excellent. Now we're watching Orphan Black ripping off Blade Runner (quite well, I might add). Here are some photos from the area around Seattle's Piers 62 and 63, including the aquarium, the football and baseball stadiums, the ferris wheel at Pier 57, the ferries, Mount Rainier, and one of the city's totem poles: 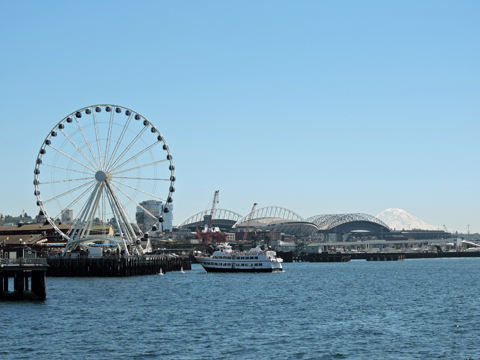