We had storms forecast for Saturday but no one was sure exactly when they would start, only that they would definitely come in waves. Adam had plans to play tennis with my father, then to study for most of the afternoon with his girlfriend, so the rest of us went without him to Baltimore -- Daniel drove -- where a replica of the Marquis de Lafayette's ship L'Hermione was visiting along with many reenactors and French craft demonstrations.

There was a massive crowd waiting to board the ship and it was very hot, so rather than spend all afternoon in line, we went to the aquarium, which was much less crowded that we thought it might be so we had a very successful visit; not only did we see the sloth awake and moving around, but the moral eel came out for us, there was a baby loggerhead sea turtle being rehabilitated, and I got to touch a skate in the new Living Seashore exhibit.

Outside, we saw ducklings and several ships besides L'Hermione -- Pride of Baltimore was sailing, as were the Urban Pirates, who tried to fire water cannons at someone dressed as The Cat in the Hat. We came home for dinner with Adam, watched the nail-biting season finale of Orphan Black and the delightful naval-themed second episode of Jonathan Strange and Mr. Norrell. Happy Father's Day and Litha if you celebrate, good solstice if you don't! 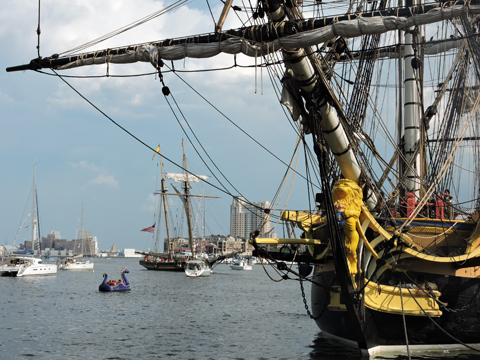