Daniel is fully moved out of his apartment in College Park and has turned in his keys! That was our big activity for the afternoon, after having lunch with Paul who worked from home so he could come; we had to make sure the place was clean enough to pass inspection. We retrieved Adam, who usually carpools home with Christine, and all went to IKEA together to look for furniture for Daniel's new apartment in Seattle, then had dinner in their restaurant now that there are vegetarian meatballs and vegan carrot ginger soup!

We did not buy any furniture, but made lists so the big items can be ordered online and delivered in Seattle. When we got home, Daniel had tracked down a copy of Star Wars Demastered, the color-corrected HD version restored to the scenes as they appeared when the film was first released in theaters, not as Episode IV, minus Jabba and plus Han shooting first, etc. I haven't watched the movie without interruption in many years and it was really awesome; as much as I love Han, I forgot how much smarter Leia is. From April, Mount Vernon lambs: 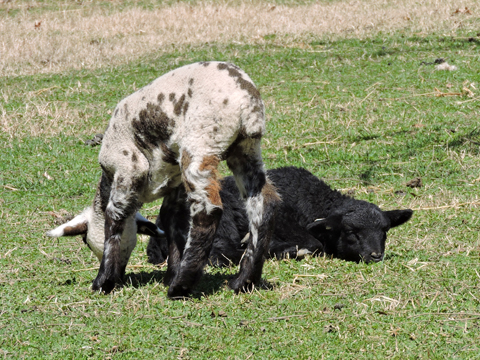