Wednesday was another relatively unexciting day, though I got to argue with both my children about the quickest way to destroy the human race and I got to pick up my new glasses, including a pair of progressives that it will probably take me a month to get used to (last time I tried progressives, I fell down an elevator at the mall and up a curb at the food store, both causing serious leg cuts) and a really adorable pair of prescription sunglasses, something I have never had before. I drove myself and Daniel there, because Daniel was picking up new glasses too, but he had to drive us home, because I had to have all the tests that require eye dilation that I didn't get last time so I could drive while his eyes were dilated!

We had one coupon for a free Domino's pizza and another for half off because of the Nationals' no-hitter last week (tonight they merely won in extra innings, heh) so we tried their handmade pizza, which is actually pretty good (of course I got feta on my half and split with Adam who got pineapple). Then we watched an awesome NOVA special on birds, after which 13 Going On 30 turned up on some cable channel. I am feeling much less silly about liking Cinderella because Cinderella may actually be more sophisticated and less objectionable than the former, and I'm saying this despite Mark Ruffalo who was of course my only reason for watching in the first place! From Lewis Ginter Botanic Garden earlier in the spring: 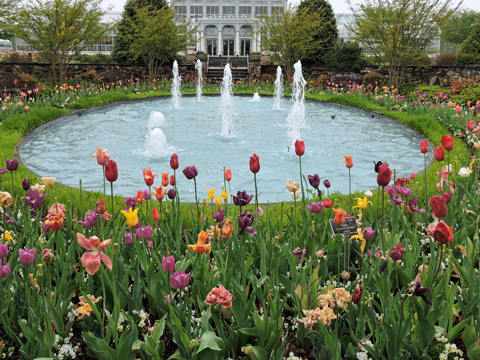