I spent a lot of Thursday working on a Project (it's a surprise for someone so in case that someone is reading this, I will not say more). Otherwise, I read a lot of people celebrating and a few ranting about Obamacare, spent a little time filtering some of the latter off my Facebook news feed, had lunch with Paul (Daniel was home but took too long getting downstairs for his lunch), and tried to get organized for my insane next couple of weeks.

This morning I realized that Beauty and the Beast was finally back on the air -- I'm not sure how many episodes I missed, but I caught tonight's, which wasn't its best but had lots of women kicking ass and not obsessing over their boyfriends, which was sorely lacking most of last season. Then I watched Voyager for review (not one of my favorites but Robert Picardo is always fun to watch). Here are some pictures of the Maryland Zoo prairie dog colony: 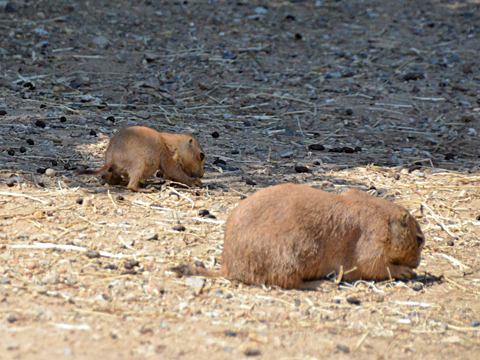