We had pouring rain nearly all day Saturday, flooding lots of local roads and making it no fun to walk around outside, though it was nice and cool. We met Kay and Chris and their kids at Ted's Bulletin, which is new in Gaithersburg and which a local reviewer said had the best milkshakes around (I don't know whether they're the very best because I've never done a study, but they were really good, plus their veggie burgers are excellent particularly the Greek one which I had).

Since the weather made any outdoor fun impossible, we went to see A Little Chaos, which conveniently is only playing in our county at the theater at the mall. The pacing is slow but the acting is great and the cinematography is gorgeous -- not just the settings, which are beautiful, but the structuring of the shots. It's a very woman-in-a-man's-world story but it does pass the Bechdel test. I wasn't sure if my kids would like it, but they seemed interested. particularly since they've been to Versailles.

Since we had such a big brunch, we ate very little for dinner and at strange hours -- I had a cat trying to steal the cheese off my bagel -- while we watched the Canada-England women's World Cup match. Then I thought Paul and I were going to watch Jonathan Strange & Mr Norrell, but he fell asleep and snored through it, so I watched that (why do there have to be zombies in everything) and now Graham Norton. Here are some photos from the National Aquarium last weekend: 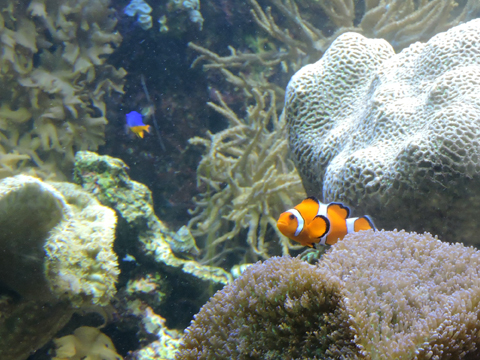