My Monday was all about chores because I am spending the rest of the week with Paul's relatives -- both his brothers are coming to the east coast with their families, and we're doing a bunch of sightseeing with them and their parents, plus a baseball game with my parents. So I had to get laundry done and organize computer stuff and things like that. My parents took Daniel to lunch and shopping for a bed to have delivered in Seattle, and Adam brought his girlfriend over to study calculus.

I was not as pleased with the Supreme Court as I was last week -- the lethal injection decision disgusts me and the EPA decision absolutely boggles me -- it's okay to poison people since that's more cost-effective than not poisoning them? At least they won't let Texas shut nearly all its abortion clinics. We spent the evening catching up on Key & Peele after I watched Voyager so I can get my review done over the course of the week! Some of the lighthouses at the Dulles Golf Center's mini golf course: 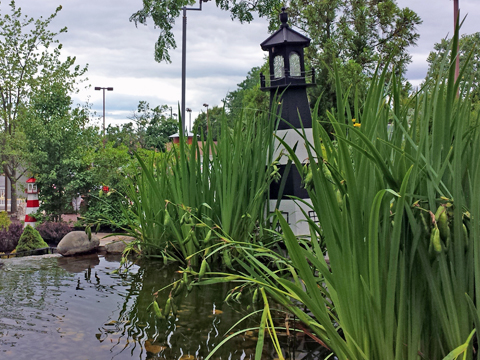