We had a very nice if long day in and around Seattle, starting with breakfast at the hotel, then a run out to Ikea to order furniture because if one orders online, it can take up to a week to deliver, whereas if one goes into the store to pick it out, they have next-day delivery. From there, we took the bookcase and stools that were easy to transport in a rental SUV to son's apartment, where we assembled them and got sandwiches for lunch from the grocery-store-plus-deli on the first floor.

We thought we were meeting a friend near the beach in the late afternoon, but some miscommunication about the meeting spot and her busy evening schedule meant that we ended up going to Olympic Beach alone. This was very enjoyable anyway, not only because the water's warm and one can see crabs from the fishing pier -- not to mention the Edmonds-Kingston Ferry, which we took in 2005 when we visited the Olympic Peninsula -- but also because there's a visitor station with an animal touch tank.

On the way back, we stopped in Bothell, where Paul's aunt and uncle used to live, to see the Country Village Shops, which are housed in historic structures (one has a water wheel, another is a former caboose) and are surrounded by water and flowers where ducklings, chickens, and geese live. We stopped at Target to get assorted cleaning supplies and home goods, then went to have dinner at the very good Greek carryout place in the same mall. McAvoy and Fassbender on Conan FTW! 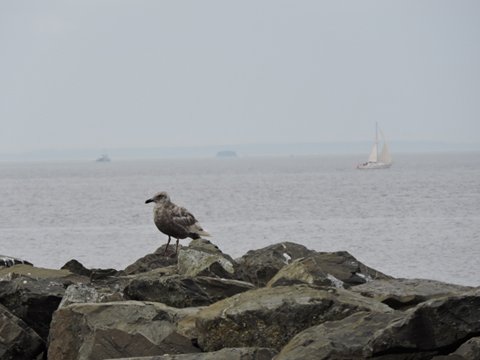