I would like to announce that I have seen enough of Fry's Electronics for a while -- on Tuesday we had to go back again to exchange Daniel's msata drive (I think that's what it was!). Before that, we took him to the MVA to get a Washington State ID -- he isn't getting a driver's license since he won't have a car -- and to Best Buy to pick up his TV and microwave. After that, we spent several hours in his apartment putting together and setting up his electronics. We had a late lunch -- carryout from local sandwich shops.

After going to the bank to change Daniel's accounts, we walked through Seattle Center to get back to the car, then fought rush hour traffic to spend a little time at Alki Beach. We had to stop at Fry's and at Target again before they closed, so for dinner we ended up eating mostly leftover Thai food (still awesome) and missing most of the All-Star Game. On Wednesday, after getting Daniel set up with groceries, we fly home! A few photos from the beach, plus the EMP Museum, International Fountain, and me punch-drunk and hungry shopping! 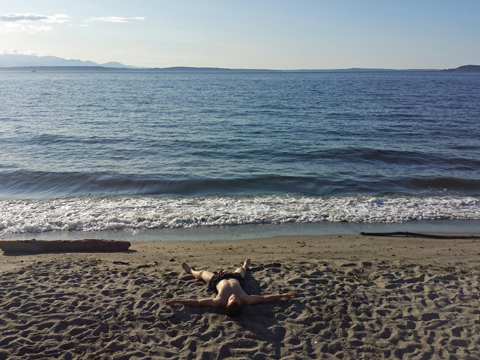