It was nearly 100 degrees on Sunday with a heat index of nearly 110, so we spent as little time outside as possible...well, all of us but Adam, who did yard work for two hours for a neighbor and was rewarded by getting to see two teeny bunnies as well as getting paid. (Daniel, who has no air conditioning in Seattle, said the 94 degree temperatures weren't bothering him.)

Because of this weather, we decided the only suitable activity for the afternoon was a trip to the movies. We went with Adam and one of his friends to see Ant-Man, which was a pretty complete delight apart from the usual Marvel problems (undeveloped female characters, atrocious science). It had just enough Avengers connections to make me happy without feeling like it was forced.

I don't mind spoilers, but I'm glad I didn't know about two lovely surprises in Ant-Man (I hadn't even read the cast list). And it's just as well that I didn't know anything about Tut, which we put on for Ben Kingsley and Alexander Siddig and is some highly entertaining crack about Egypt (about as realistic as Ant-Man)! Here are some of the green herons we saw Saturday: 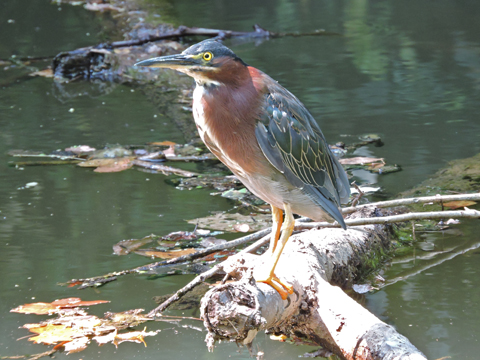