Monday was Adam's 19th birthday! By this time 19 years ago, he was in the NICU because they were concerned at how low his blood sugar was, and I was begging for broth, jello, anything -- I hadn't eaten anything all day before he was born and we were both very hungry. Today he was extremely busy with summer school, since he has a math final on Friday and two papers to write for his geography class between now and then, so he brought Christine home to study with him. In the late afternoon when I'd finished various chores and Paul got home, we picked up my mother and went to Tara Thai, which was Adam's choice for a birthday dinner (I had panang curry, yay).

Then, since Adam had work to do, I watched Pocahontas with Christine. And when she eventually went home, while Adam went upstairs to finish working on his essay, Paul and I watched the second night of Tut, which remains mediocre yet compelling like Dallas. (As Adam pointed out when he walked through the living room on his way upstairs, the Pharaoh's friend is banging his wife and banging his sister and trying to take his crown? That's, like, three Shakespeare plays in one!) At least the people of color are mostly appropriately cast for a show set in Africa. Meanwhile, Daniel started work at Amazon, where he was fed and issued a new laptop! At the C&O Canal: 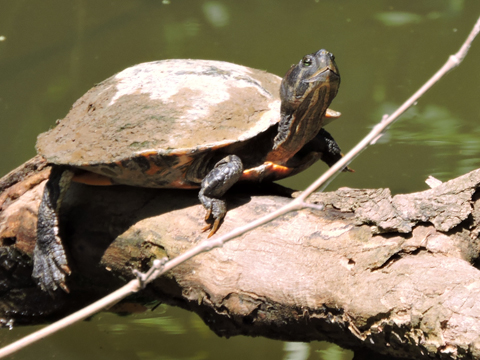