Paul and I had a nice day in Richmond with Cheryl, beginning with a walk around the big central pond at Deep Run Park, where we saw lots of frogs, a snake, a skink, some fish, and many dragonflies, plus flowering crepe myrtle and gorgeous green trees, then eating lunch at India K' Raja, which we visited a long time ago with Cheryl and which still has fantastic food, including a big lunch buffet with lots of vegetarian dishes plus mango iced tea and several desserts. 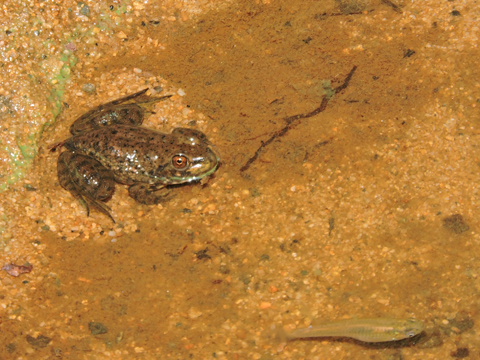 Then we went to see Mr. Holmes, which has a fantastic cast and gorgeous cinematography -- everyone I know who has seen it wants to move into that house -- and while the plot and structure are somewhat predictable, it's worth seeing just to watch McKellen, Linney, Allam, and the rest. We met Lin for the movie and afterward we all went to Baskin Robbins. We returned to Cheryl's to collect our stuff and say goodbye to her cat (who did not allow us to pet him, though he did the night before).

We drove home in typically slow, annoying I-95 traffic and had a small late dinner while watching Masters of Sex, plowing through the years, which would be fine except the main characters' lack of aging is preposterous. Now we're watching This Week Tonight, in which John Oliver just declared that the US has too many people in prison, enough to populate a whole country, which is not a good idea because the only good thing ever to come out of that experiment was Hugh Jackman and that took 180 years!
Collapse