I am typing this entry on a laptop running Windows 10! And so far, knock wood, it seems to be working really well, doesn't even crash doing things that used to make it lock up -- the only problem I've had thus far was having to reauthorize Photoshop Elements 8 by downloading a tool from Adobe. This was not, however, the laptop on which I initially tried to install Windows 10 (which is not going on my desktop for months, until I am sure everything will work). I wanted to put it on my convertible laptop, which runs odious Windows 8, so I really wanted to update it as soon as possible because how could Windows 10 be worse? But the install failed three times and I can't figure out why!

Needless to say, all these computer shenanigans took up a lot of my day, which also involved starting a review, having dinner with my parents since we all have plans tomorrow in different places, chatting with Daniel about the Summer Games Done Quick video game charity event, avoiding asshats on Facebook and LiveJournal, watching baseball, watching The Daily and Nightly Shows, and watching a spectacular afternoon thunderstorm that didn't particularly lower temperatures, but led to an evening with lots of cicadas and bunnies and fireflies in evidence, plus a sky that looked stunning while driving home and equally stunning walking around the neighborhood: 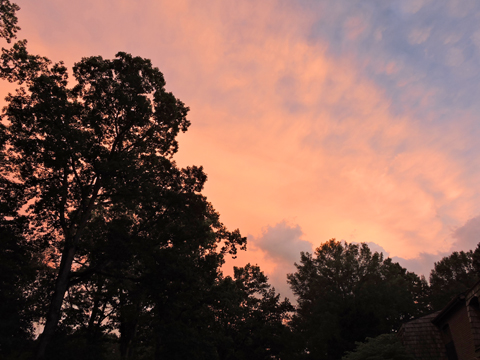