Both my laptops are now running Windows 10 -- I had to create an installation drive and erase everything off the ASUS Transformer to install it on that one's very small hard drive, but it's working and I was even able to restore MS Office despite the fact that the laptop didn't come with discs. So I feel accomplished, and so far pretty much everything I need is working, apart from some niggling things like not getting printer notifications (I can scan and print, which are more important). I chatted with Daniel tonight about various issues we were both having uninstalling Microsoft's new apps, but for the most part I really like Windows 10.

While Windows was installing on my ASUS, I finished a review of Voyager's "Learning Curve" and did various chores which included Adam's laundry after Paul and I picked him up in College Park, utterly exhausted after a week of being an R.A. for high school students while finishing a summer geography class to free him up for engineering classes in the fall. He has worked hard all summer! In the evening Cheryl and I decided we should watch Harry Potter and the Sorcerer's Stone in honor of Harry's birthday. Here for nostalgia's sake are some photos of this spring's cherry blossoms downtown: 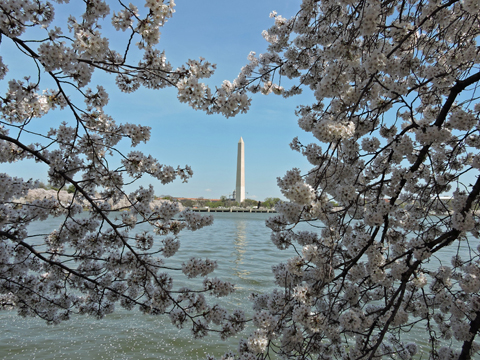