I had a busy but unexpectedly wonderful Monday helping Heather rescue a pair of three-week-old kittens who were unceremoniously dumped on her by a neighbor last weekend. None of our friends who work in animal rescue knew a potential foster, so I took a chance and wrote to both the woman who ran the rescue organization from which we adopted Daisy and the woman who actually fostered Daisy. Within hours, these women with whom I'd had no communication for seven years had written back to offer help, the woman who now runs the rescue had joined the conversation, and the foster mom had offered to take in the kittens for as long as they're bottle feeding.

So Heather drove all the way down here from where she lives in Delaware with the kittens, and I got to spend more time with her than in ages, even if we were busy feeding and cleaning up after kittens a lot of the time. Adam was home before and after a dentist appointment and Jamie, one of his friends who fosters kittens, came to visit, help feed and clean. In the late afternoon, the foster mom asked if we'd mind coming up toward Frederick to meet her since she lives north of the city, so we said goodbye to our guests and drove the kittens to meet her. It was a bittersweet goodbye but she will take better care of them than we could. 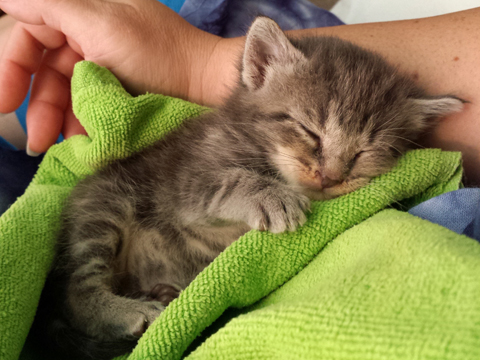 If you can identify the one member of our family who was really, truly disgruntled about the kittens above, you will know why we spent a quiet evening watching Harry Potter and the Goblet of Fire while indulging Daisy with fishy treats (and Cinnamon with Smartfood, which for some reason she really likes). Daisy was curious about the box and sniffing it until a meow issued from it, at which point she spent an hour growling in the corner and hissing whenever a kitten emerged, though she backed away as if she was scared. GOF remains a pretty silly story, but hey, it has David Tennant and Robert Pattinson as well as Jason Isaacs and Alan Rickman, so it's all good!
Collapse