My Tuesday was not quite as exciting as my Monday with the kittens, though I got to have lunch with Adam at Lebanese Taverna, so that was nice -- it was our reward for having spent more than an hour in the bike store waiting to talk to the mechanic about what needed to be repaired, ordering and paying for replacement parts, renewing the service contract, etc. So I had hummus and lebneh, and I got to start catching up on mail, photos, and other things neglected over the weekend and during the kitten interlude. Hey, Daisy and Cinnamon are still recovering too!

Tuesday night's movie was Harry Potter and the Order of the Phoenix, which is my second favorite of the series -- it has Helena and Emma and Imelda as well as Jason, David, Maggie, et al, and it has my two favorite brief Alan line readings ("Obviously" and "No idea"). We turned it off just in time to watch the Nationals try very hard to blow it in the ninth before pulling off a win that the local announcers attempted to define as the start of a streak, which I thought had to consist of more than one win in a row. Some of the many turtles in the C&O Canal the weekend before last: 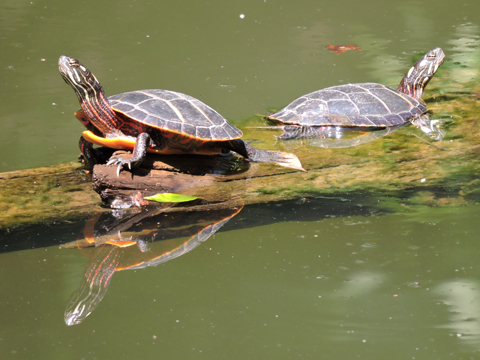