My Friday involved a lot of fighting with computers. Apparently Google Drive either does not like Windows 10 or just does not like when a lot of files get moved/renamed, because instead of simply changing the indexes to recognize where the files now are, it is trying to delete and then re-download tens of thousands of files on my laptop, grrr. Sometimes I think about switching to Dropbox (or these days Microsoft's cloud free with Office). Also, we have a new online publishing system in place on TrekToday which required that I do an unsuccessful hunt for usable photos of a particular size that are not easy to find for every episode. I did at least finish and post a review of Voyager's The 37's!

Otherwise my day was pretty quiet. Adam was in and out, since he's been running to get back into shape before he goes back to College Park at the end of the month. I had lunch with him and we all had dinner together before watching Harry Potter and the Deathly Hallows, Part One along with Cheryl long distance (Adam had writing advice for Rowling concerning logic and redundancy, but hey, this movie has pretty much everyone in it). Daniel must spend a lot of the weekend in Seattle learning programming for his job at Amazon, so here are some photos of the beach and woods trail there, starting with the lighthouse since Facebook told me that Friday was National Lighthouse Day: 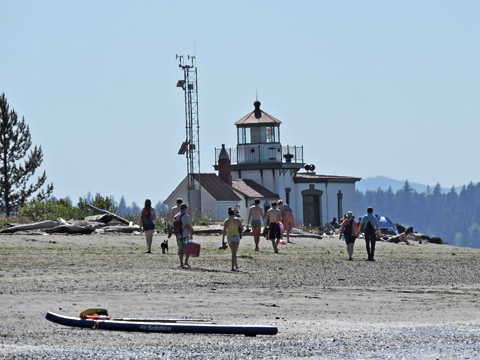