Thursday was about chores and work and boring stuff, though also several baby bunnies and finally finishing resynchronizing Google Drive, which I'm going to have to do all over again when I eventually get one with a webcam and other newfangled devices (hundreds of thousands of freakin' files uploaded, people). Adam went out running and for food with a friend from high school who's also in college with him; the cats slept for hours, then woke up and wailed pathetically as soon as he got home to inform him that I had failed to feed them.

There is football back on television! Which I know I should not be pleased about (cheating, head injuries, domestic violence, etc. etc.), but I got excited when the Ravens showed up on my screen anyway. And they won! Even the other local R-words won. To be honest, though, we turned off the Baltimore game when most of the people we'd heard of went out at the half and put on Catch Me If You Can, which Adam hadn't seen and Paul and I barely remembered -- it was completely enjoyable. Some of the lions (dad and cubs, I think) at the Maryland Zoo: 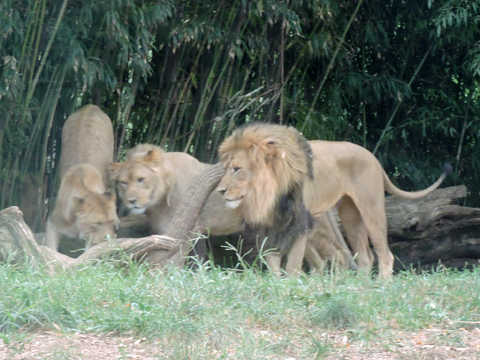