It was a very hot Saturday in DC and I had a lengthy war with Windows 10, which either downloaded an update that it choked on or ran into another incompatibility with Google Drive, which was what seemed to lock it up (it reversed the update and for a minute I was afraid it was putting the system back to Windows 7). That was no fun At All. I wish Windows 10 was more transparent about what's going wrong -- I can't even find much useful advice looking on Google for other people's issues.

Adam went running with friends and played tennis with my father in the morning. In the afternoon, he wanted to stop at Old Navy, so since we were in the mall anyway, we went to see The Man from U.N.C.L.E., which I enjoyed -- I don't have any deep attachment to the TV show, having seen very little of it, and the production values of the film are gorgeous, the women are tough and interesting, and if its retro vibe resists progressive casting, it's still a fun couple of hours.

We had a coupon for a free Blaze Pizza, so we went there for dinner. Then, in the evening -- please don't lose all respect for me -- we watched Tropic Thunder and I laughed my ass off through most of it (TOM CRUISE). Obviously it has huge issues with race (the characterization of Asian people even more than the blackface, which is played as straight-up parody of method acting) and let's not even talk about the absence of female characters, which may be a good thing.

Some of the animals we saw at Brookside Gardens when we took a walk outside the conservatory after going to Wings of Fancy last weekend: 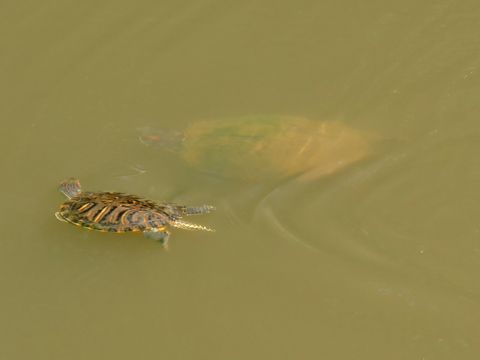