Sunday was nearly as hot as Saturday, so we got a slightly late start, especially since Adam went running with his friends again. When we were organized and had had lunch, we went to the Folger Shakespeare Library, which has an awesome exhibit called Ships, Clocks & Stars: The Quest For Longitude, with lots of items on loan from the maritime museum in Greenwich including John Harrison's original award-winning timepiece, the H4, plus replicas of his earlier efforts, and several of the chronometers that Captain Cook tested on his voyages.

Then we went to the National Zoo because we wanted to see Kandula, the young male elephant born at the zoo who will soon be sent to another zoo for breeding. There's a big Asian elephant herd at the zoo but the biggest surprise in their enclosure was a deer that apparently wandered in from Rock Creek Park -- there have been issues with deer wandering through other areas of the zoo, but I've never seen one in any of the big animal enclosures before. We also saw the lions -- the cubs are slowly departing for other zoos -- and lots of adorable mammals: 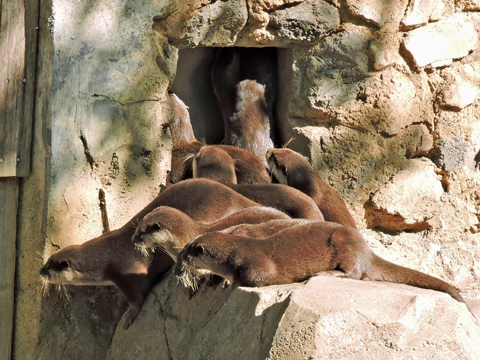 I only cropped a few photos because we all watched The Giver, which I knew wouldn't compare to the book but has a cast I like. It definitely oversimplifies the plot and therefore feels like a riff on movies like Equilibrium and Pleasantville instead of the great novel that was their inspiration, but I still enjoyed it. Afterward Adam went to bed and we watched Masters of Sex (which this season could be called Smart Women, Foolish Choices) and John Oliver's Last Week Tonight mega-church takedown and foundation of his new moneymaker, er, religion!
Collapse