Wednesday was low-key around here. Paul worked from home and worked on pizza dough at lunchtime so we could have homemade deep-dish veggie sausage pizza for dinner (it was awesome). Adam came home a bit after noon from his movie marathon and went to College Park to deal with payroll and textbook issues from the summer. I did some work and downloaded and configured some film editing software -- did I mention I got a webcam the other day, my first? -- and decided my desk lamp was boring and needed colorful beads hanging from it, which it has now.

Adam went to see his girlfriend after dinner since she just got back from the beach and he hasn't seen her in a couple of weeks. The rest of us along with Cheryl watched Casanova -- the one with Heath Ledger, not the one with David Tennant, since the former is Venetian, lighter, beautifully filmed and scored, full of actors I love, and, considering that it's ostensibly a movie about a notorious womanizer, quite feminist. Some more photos of things we did at the county fair, which had an illusionist, a rain garden, and a buzzsaw artist in addition to the animals, rides, and food: 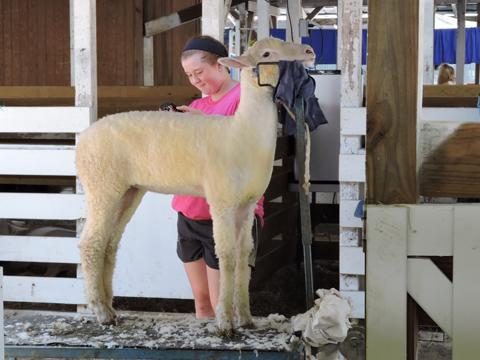