Saturday's weather was gorgeous. In the morning, Adam played tennis with my father while I worked on my Shutterfly project -- which is now finished pending approval by various relatives! Then we all had lunch and went to Huntley Meadows Park, which is quite wet this year but the water is in different places -- the part where the boardwalk starts has lots of water (and frogs, many snapping turtles, and at least one snakehead fish), while the part that used to be an open pond is now full of cattails. This may be the first time we've been there where we didn't see a single Canada goose, but we saw several great blue herons and an egret! 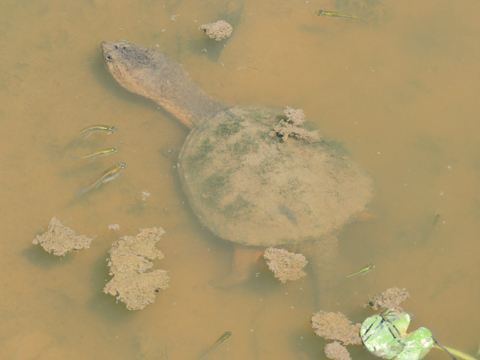 Adam had a date with Christine, with whom he went to CPK and hung out for the evening, so Paul made us vegetarian Coquilles St. Jacques made of konjac with pecan wild rice. We watched the first episode of Blunt Talk, which was sadly too much Seth McFarlane overwhelming the Patrick Stewart but I'll give it one more chance. Then we watched an episode of Inspector Lewis, which is always great -- at least, an improvement over watching both the Orioles and Ravens lose. But in really good news, the female giant panda at the National Zoo gave birth to twins (and unlike last time that happened, both seem to be healthy)!
Collapse