I spent a ridiculous amount of time on Friday working on a review of Star Trek: Voyager's "Elogium", which entailed, among other things, pulling out a VHS tape I hadn't looked at in nearly 20 years to see whether I had the original trailer recorded (I did) since only the newer, less prurient one is on YouTube. I should probably have spent more time on incisive feminist analysis of compulsory heterosexuality and Kes's decision not to have a child, but I was distracted by the glorious Janeway/Chakotay scenes.

Otherwise, it was a relatively uneventful day. Saw three bunnies while out walking, had dinner with my parents, talked briefly to Daniel who needed information for security clearance forms for work, talked briefly to Adam about the fact that there's a Target now in College Park. Now we are watching Inspector Lewis, our second fifth-season episode (previously it was one with lots of Ashley Madison scandal parallels, so very timely). Here is a bird washing in a puddle downtown near the Smithsonian: 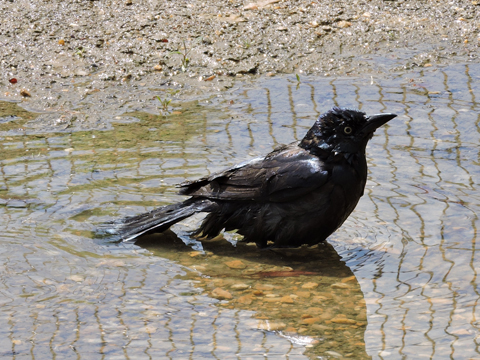