Sunday was as hot as Saturday -- August returning before it ends! We had a fairly quiet morning -- I had online arguments with representatives from both Verizon and Shutterfly over billing things -- then we went with my parents to the National Gallery of Art, where we saw the Gustave Caillebotte (wonderful Impressionist), Joachim Wtewael (hyperbolic Dutch), and Memory of Time (contemporary photography) exhibits. Then we went to Blaze Pizza, where we had birds visiting our table with hopeful expressions: 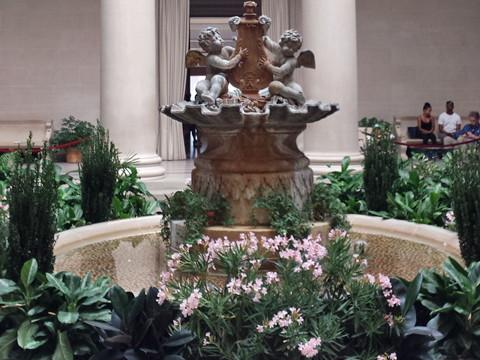 When we got home we watched a few minutes of preseason football, got bored, and watched the first sixth-season episode of Inspector Lewis -- I am trying to decide whether I want to catch up fully so we can watch the eighth season when it airs in October or whether I want to drag it out so it's not over! After that we watched the beginning of the second season of Vicious on PBS, which was utterly hilarious except that we're getting it bleeped (we watched British recordings first season, so no censorship).
Collapse