My morning was very uneventful, and my afternoon wasn't supposed to be, but our car was in being serviced and when we went to pick it up, the sky quite literally opened up -- sun out when the first huge, noisy drops started falling and still out when it started to pour blindingly. There was probably a rainbow but I was struggling just to stay on the road after dropping Paul off at the dealer to drive the car home. The wind was blowing, leaves were coming down everywhere...it smelled great and the temperature had dropped nicely when I got home, but I was glad not to be driving in it any longer!

We had another thunderstorm around dinnertime, though there was enough of a break for me to take a walk and see bunnies enjoying the wet grass (we had really needed the rain). I watched "Non Sequitur," the Voyager episode I need to review this week -- I had given it an atrocious review the first time around and I can see why -- then switched off between NFL preseason and NCAA football (it's too soon for me to feel sorry for Michigan, the Ravens came so close, and I'm sure the Nationals played as well as they did because I was watching football not baseball). The Wizard of Oz playground at Watkins Park: 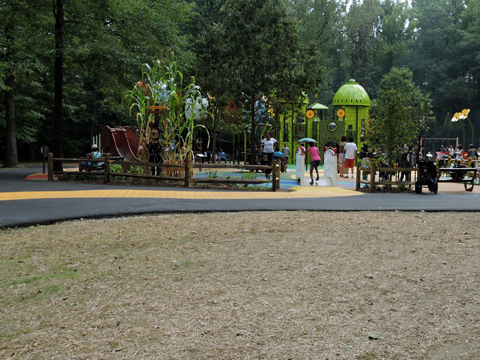