Most of my excitement Wednesday happened on a screen, though I did get some work done. In the afternoon while I was folding laundry, I watched the Geoffrey Rush and David Wenham episodes of the Australian version of Who Do You Think You Are? (both very Aussie stories in some ways -- Rush is descended from a convict, Wenham's grandfather was a Gallipoli veteran -- and unusual in others -- Rush comes from a long line of German musicians, Wenham's paternal family isn't really the Wenhams).

Angela and Kevin came over for dinner and movies; they brought bread and goat cheese, Paul made stuffed pizza. We watched Soapdish, which I had never seen and now have no idea why -- that movie is hilarious, RDJ is deadpan and fun, Kevin Kline steals every scene he's in, and Sally Field is delightful. Then we watched the truly terrible The Room, where the dubbing is the only thing worse than the acting! Some photos from the bird show at the Pennsylvania Renfaire: 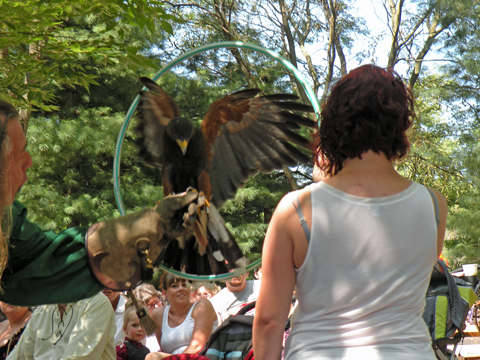