I got to see Adam briefly on Tuesday, which was nice -- we needed to drop off his fall clothes and take his bike to be repaired (yes, we did just do that, but the chain broke again), so we took him out to lunch at Rasoi, whose lunch buffet is as excellent as its dinner choices if not better because there's more variety for everyone. He had a good time at the hackathon (he got to eat poutine) and he's thinking about minoring in astronomy, something that has always interested him. The weather was gorgeous, we saw several deer in the neighborhood and lots of zippy chipmunks trying to GRAB ALL THE ACORNS before the squirrels get them. We had a haphazard dinner of leftovers because we were still pretty full from lunch.

For our Tuesday night premiere week TV watching, we started with The Muppets, but it was so terrible that we didn't make it through the first half hour. It was sexist, mean-spirited, more like Ted than past Muppets, and I actually liked Scream Queens better for a few minutes when we switched channels before that too went way over the top. Then we tried Limitless, which was okay -- nothing offensive or ruinous to its previous incarnation, but somewhat cliched in all the character interactions and not grabbing me the way Minority Report did...not even the way Blindspot did, since I'm looking forward to the second episode of that more than the next Limitless. Some more photos of art from ArtsFest at Annmarie Gardens: 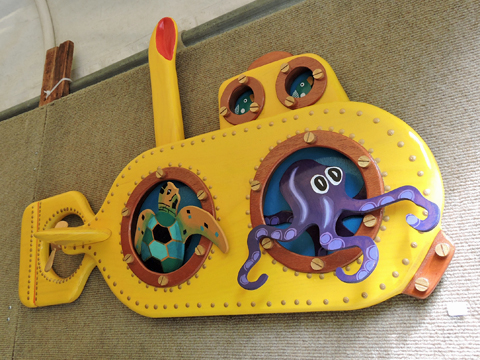 Have a good fast if you're observing Yom Kippur!
Collapse