I had a lot of work and chores to get done on Thursday, the most fun part of which was running over to Best Buy because I realized my $10 reward certificate was going to expire and I wanted to get Branagh's Cinderella for half price. I finished my Voyager review a day early (because wow is it easy to write a review of an absolutely terrible episode) and finished various other projects -- just about everything but taking Liz's t-shirts to the post office got done. I even managed to watch the Pope address Congress. We took a walk later than usual and saw five bunnies for the first time in weeks, including two young ones -- they must be coming out later for the fall.

We watched the revamped Heroes Reborn, which I enjoyed nostalgically in parts -- Noah was always my favorite character, I always knew he was on Claire's side and would do anything for her -- and Katana Girl is pretty awesome. But I must confess that I've forgotten a lot of the fourth season of Heroes, so I really wish they'd done some quick exposition summarizing where we left Mohinder, Matt, Hiro, the Petrellis, et al -- a couple of characters discussing it Game of Thrones-style in the middle of a sex scene would have been entirely welcome in this instance (that is how the scene with the Haitian should have gone!). Some more photos from Annmarie Garden, the sculpture rather than the festival: 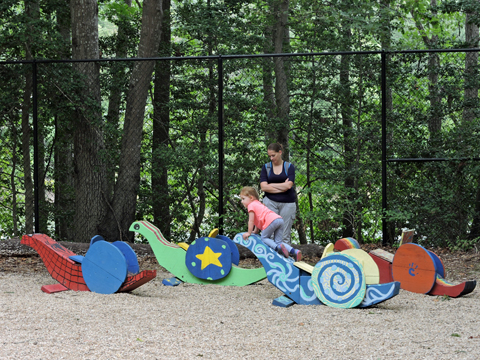