Apparently the winds of Hurricane Joachin are mostly going to pass us by, but we've had so much rain the past two days and are expected to get so much more in the next two that we're still under flood warnings and lots of fall festivals have been canceled around here. So it is probably going to be a mostly indoor weekend -- at least it won't be too difficult to catch up on the TV we missed while in Seattle!

As usual, we are starting the season trying out about 8 shows and will be down to maybe 3 before it's over. On Thursday it was catching up on Doctor Who (love Capaldi but these stories seem so derivative of storylines other people did better), Agents of SHIELD (whyyyy is there still so much Skye whatever her name is there's still too much of her), and Limitless (stealing a Nancy Kress story was a good idea).

It was a very TV-focused day, since I had to finish writing and posting a review of Voyager's not-as-good-as-it-should-have-been "Tattoo" with its mumbo-jumbo Native American spirituality...not the best day for it, since I have trouble staying awake when it's so dark out. I am missing Seattle, which is supposed to be the rainy city but we had gorgeous clear skies! Here are the Lake Washington Ship Canal Chittenden Locks and fish ladder: 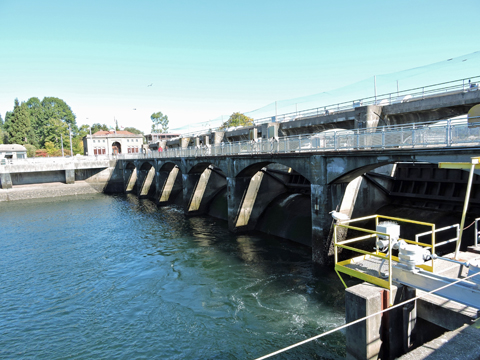