I have not seen the sun in too many days -- ironically, since I was in Seattle, given that city's reputation as opposed to this one's -- and it is making me sluggish and cranky. We did get out some today, to Great Falls in the drizzle when the Maryland-Michigan game became even more depressing than the weather (let's just say the Terps did not score any points while the Wolverines did). We saw more vultures than I've ever seen in one place before, though we couldn't figure out what they were eating, and the river was higher than a couple of weeks ago, though not as high as we thought it might be in the rain. At least it wasn't muddy and there were no crowds! 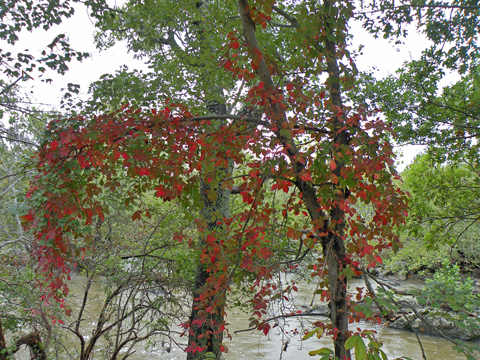 And we are now caught up on television! To my surprise I really liked the Once Upon a Time season premiere -- oh, Hook and Snow are as annoying as ever, and the Knights of the Round Table made me recite Monty Python, but Nurse Ratched and the Indian made me howl, and there's that lovely Swan Queen moment when Emma gives Regina the blade. As for Masters of Sex, I don't feel sorry for him, everything Libby said about him is true, but Virginia must know she's settling -- she's not afraid of being left, she is the one who gets bored and cheats, she is not looking for a man to make her happy, she knows her ambition is what makes her happy! As for Doctor Who...why do I keep having deja vu?
Collapse