Most of my Thursday was unexciting, but I got to have lunch with Karen at Tara Thai, which makes it a good day -- plus I got to walk around Washingtonian Lake and see the geese, cormorants, and the biggest carp I've ever seen. The trees are starting to turn so there was a lot of color. Later we took what turned out to be a long walk around the neighborhood because we got into conversations with several neighbors about everything from contractors to coverage of the 2016 election (which in fairness I only watch on late night comedy shows). The bunnies were busy eating and ignored us.

Heroes Reborn was really good, though I wish there were a more prominent female character, not a villain, neither support for a guy nor in need of aid/rescuing...I want Claire back! Surely they can borrow her from Nashville? And Sleepy Hollow had me squeeing aloud. Ichabbie roommates! Some photos from Seahurst Park in Burien, which is so close to SeaTac Airport that you can get there without having to drive on the highway, meaning there's no way you'll miss your plane even if you go on the morning you're flying out. It's right on Puget Sound and you can see the Olympic Mountains! 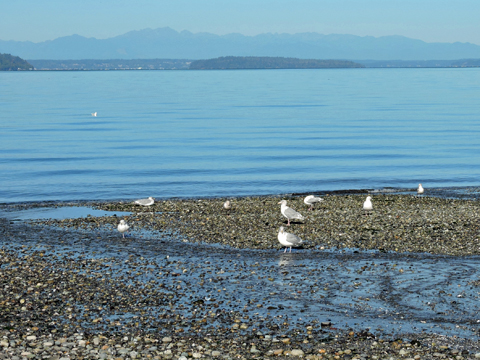 We had rain overnight and woke up to very overcast skies, so it was just as well I had a lot of work to get done on Friday. Paul was working from home, so he watched Voyager's Kes-focused "Cold Fire" with me before he went off to his corner to do his work and I went off to my corner to write my review (warning: it's not a rave). I had a bit of a pre-storm headache in the afternoon, but we took a walk to see bunnies before the actual lightning, thunder, and pouring rain arrived just as we left to go to dinner.

My parents' longtime friends the Leavitts are visiting to attend the Bar Mitzvah of a grandchild of mutual longtime friends the Goldmans (they all used to live in the same apartment complex when their oldest sons and myself were all babies) so we got to eat with them as well as my parents, which was really nice since I haven't seen them in a couple of years. Unfortunately, most of the baseball did not go the way I was hoping. Some photos from the Washington State Arboretum in Seattle, where fall arrives earlier than here: 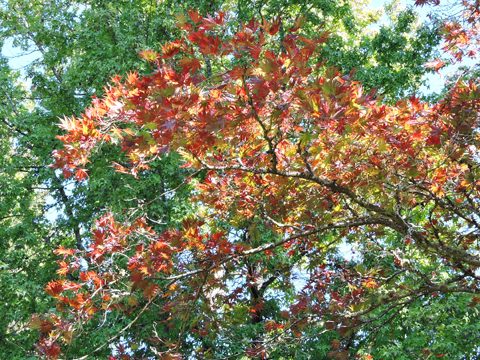