I don't have much to report from my Monday, apart from good weather, a certain amount of work finished, and a bracelet put together because when I was fixing the earring I broke in Richmond yesterday, I discovered that I had some red Swarovski bicones and some pretty little round silver beads. I did not do anything to celebrate Columbus Day or Canadian Thanksgiving -- well, we had corn and bean chowder for dinner with harvest grain bread, plus a pumpkin muffin for dessert, but I'm not sure that really covers either holiday.

We did watch the Madam Secretary we missed driving home from Richmond on Sunday (Madeleine Albright FTW and I could never do her job, I'd want to punch the obnoxious smug belittling asshole too much) before watching this week's Minority Report, which has tragically already been canceled so there's no point in my analyzing it (hahahaha Obama is on the $500 bill!). Blindspot, at least, has a full season pick-up! Here are photos of the Latin Ballet of Virginia's performance at Lewis Ginter's Rose Fest this weekend: 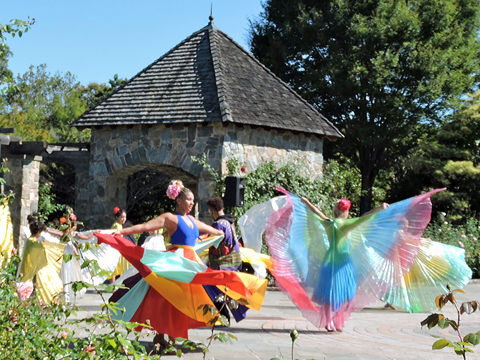