My Friday was a little strange because they're still paving our parking lots (and apparently running very late -- none of the parking spot lines have been painted and people are freaking out because we can't move our cars back yet) so it was weirdly quiet with no vehicles coming and going. I was stuck in the house all morning anyway working on a review of Voyager's "Maneuvers", which I thought maybe would annoy me less after all these years but is still pretty annoying.

I did take a walk, but didn't see a single bunny and even the chipmunks were subdued because of all the paving and painting. We watched The Illusionist with Cheryl, which I'd only seen once and Paul didn't think he'd ever seen; I appreciate its performances and visual style, but it's not in my Top 10 as is true of some of my friends. Here are some photos from Seattle's Olympic Sculpture Garden, which has great views of both the Space Needle and the water: 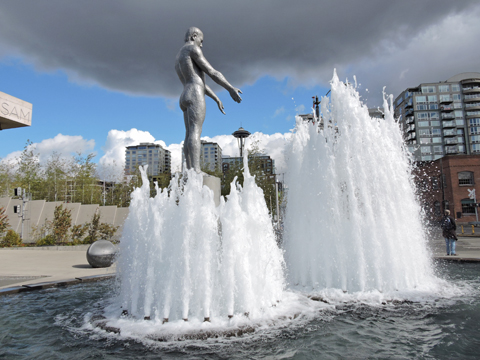