Another quickie because Cheryl and I spent the day having fun -- we woke up and watched the Geoffrey Rush episode of Who Do You Think You Are?, then we went out for what was supposed to be a quick run to Torrid to check out the Star Wars leggings, but we ended up shopping at Target (which has Star Wars Halloween candy holders) and Kohl's (which has Avengers leggings and glitter Terp shirts) too! I forgot a shirt I had intended to exchange, but I have new fall shirts plus Tony Stark, Bruce Banner, Steve Rogers, et al on my thighs.

Then we came back here, made sandwiches for lunch, and ate them while watching Longitude, which I hadn't seen in a decade. It's a great story, and though I think the back-and-forth between eras works better in the second half (and the women's roles leave a lot to be desired), I love both Irons and Gambon's performances and the nautical history. In the evening we caught up on Madam Secretary and saw this week's Blindspot -- much better female characters! From Seattle's Lake Washington Ship Canal, Chittenden Locks and fish ladder: 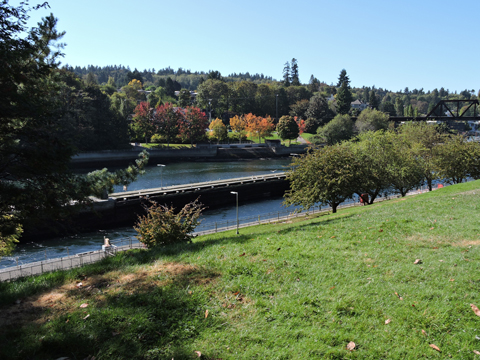