We had plans for most of Sunday, nearly all of which got altered, but the weather was gorgeous and there were beautiful leaves everywhere so it all worked out. We were going to drop off Adam in College Park early and meet a friend at Mount Vernon, but Adam's sleep schedule and traffic made us late getting to the University of Maryland, by which point our friend wasn't feeling well and said she thought she'd take a rain check. We were headed toward Mount Vernon anyway but the Beltway was at a crawl, so we changed our itinerary and went to Brookside Gardens, where we saw mums in the conservatory and lots of color all over the park: 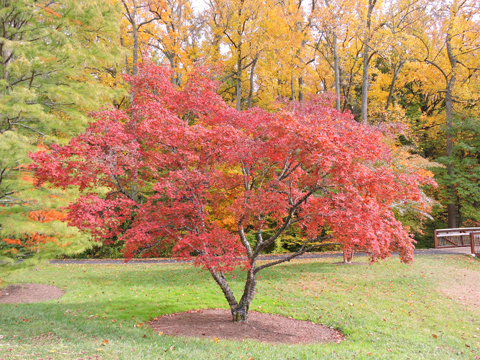 We visited Huckleberry Fine Arts because Rob Gonsalves was there signing his new book, and we stopped at Mom's Organic Market, getting home just in time for the last play of the Washington football game, which they won after coming back from 24-0! After dinner we watched Once Upon a Time, which bores me and irritates me except when Regina is onscreen -- the whole show should just be Regina and Emma snarking at each other with a few minutes of Old Gold -- then the pilot of The Man in the High Castle, which is very enjoyable so far, though very different from the book (less literary, less concerned with the banality of evil).
Collapse