The temperature dropped nearly 20 degrees on Monday so it was a lovely cool fall day, and apparently the neighborhood animals don't mind because we saw three bunnies and two deer in the evening while we were walking around the block. Otherwise it was an uneventful day; I spent a lot of hours on an organization project that no one who did not live in this house would even notice, and I got some Sugru to try to repair my camera grip since Nikon is giving me obnoxious runaround.

We had Indian food for dinner, having discovered that Mom's Organic Market has curry jackfruit that has the texture of meat, which is awesome. Then we watched Supergirl, which I liked for many reasons from sister issues to kick-ass women to Calista Flockhart practically stealing the show, and we haven't even really seen Kara's adoptive parents yet. It's much cheerier than Blindspot, which I like but it's so dark. Some photos from Brookside's chrysanthemum exhibit yesterday: 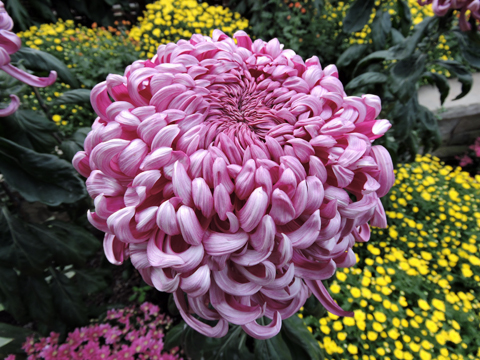