The remnants of Hurricane Patricia moved over us for 24 hours here, so it was a dark, gloomy day with periods of pouring rain. Paul was working from home, so in the afternoon we watched Trainwreck, which I was surprised at how much I liked -- I love Amy Schumer as a public figure, but sometimes her comedy makes me cringe, especially her racially based stuff (I know she says that her intentions is to parody racist girls but the line gets really thin and it doesn't feel so sex-positive).

Karen asked if I wanted to meet her for dinner, so since I begged not to have to drive far in the rain, we met at the mall and had Blaze Pizza and a bit of shopping. I got home for Arrow (reasonably entertaining) and Nashville (OMG everyone is eleven, which is easiest to forgive in the actual eleven-year-old, but as usual Scarlett's singing redeemed the episode), both watched around the Mets-Royals game. Snapping turtles spotted last time we were at Huntley Meadows, in August: 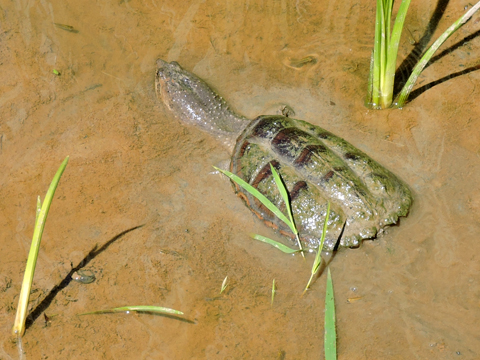