I had a very nice Friday, though it involved several hours of work, as I needed to review Voyager's "Prototype" and hadn't seen it in a couple of decades. I forgot that I really loved that episode; I wouldn't say it's great, since it's very predictable and the androids look like they wandered in from a '50s movie, but it's a great Janeway-Torres story with lots of traditional Trek arguments and women doing science.

I had a shirt I needed to return at Macy's, so I went to see what was on sale and got a fuzzy poncho at a huge bargain. Then I stopped at Locust Grove on the way home because I could see that the leaves looked very pretty as I was driving by. There were lots of squirrels and chipmunks hoarding acorns and making irritated noises at me as I walked along the creek, plus painted pumpkins outside the nature center.

We had dinner with my parents and watched Billy Joel sing the Star Spangled Banner, then came home and watched the Mets victory around the Bones-Sleepy Hollow two-parter, which was hilarious -- I had never seen an episode of Bones before and now I have no idea why not, Emily Deschanel's reactions to Tom Mison are awesome. Some Halloween photos, including one from Locust Grove and another with my mother after dinner: 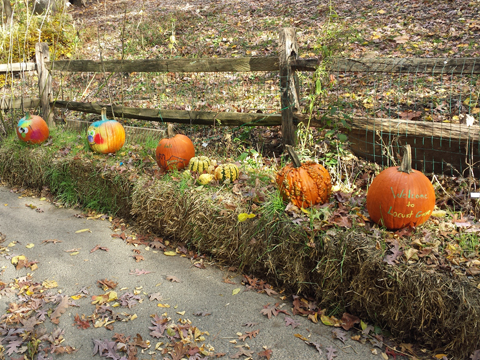