I spent most of Thursday settling these girls into their new home, which involved a lot of playing with fuzzy toys, several minutes of convincing Daisy and Cinnamon that they didn't need to stand outside in the hall hissing, and quite a while visiting with friends who wanted to meet the new residents, including our neighbor Rose, who brought even more presents! Plus we had dinner at California Tortilla with Angela and Kevin, who then came over to play with the kittens! 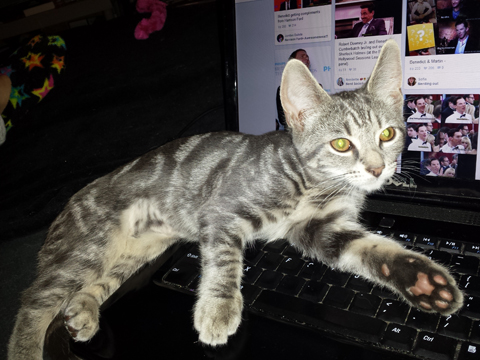 In between playing with the kittens and consoling the cats, who needed extra attention, we watched Heroes Reborn, which I am really enjoying so I am sad to see that its ratings are probably not going to get it picked up. Sleepy Hollow is mostly awesome fun this season, and Elementary is better than last season though it still doesn't have the energy of its first season -- less arc, more individual stories (and the occasional non-murder case!) would be most welcome.
Collapse