I had a lovely Monday with Cheryl and the kitties! After playing with kittens, we went to California Tortilla for lunch, then went to the holiday boutique at Washington Hebrew, where we saw my mom plus various friends, looked at lots of jewelry, and gifts and Cheryl bought a wall hanging. Then we came back to my house, brought the kittens downstairs to the cage, and watched Soapdish and Tropic Thunder (look, it was an RDJ mock-the-industry day) and played with the kittens some more!

My two usual Monday night shows pre-empted their planned episodes in sympathy with the victims of the Paris attacks; Supergirl ran its Thanksgiving episode early, postponing a story with a bombing, while Legends reran the season premiere, postponing a story with mass murder in Paris. So we watched Minority Report, which I will miss so much when it's gone in two weeks, and Blindspot, which I am enjoying though it needs more women interacting. Fall color from last year on Skyline Drive: 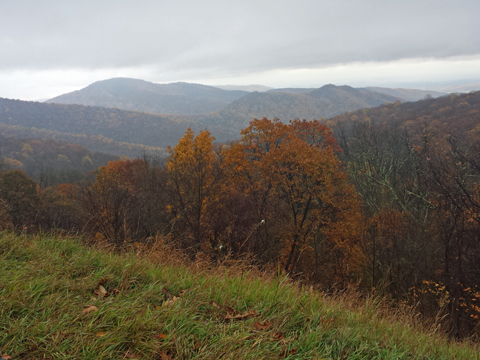