My Wednesday was quiet -- well, except when my housemates were growling, hissing, meowing, or clawing the carpet to establish whose territory was whose! We let the kittens wander loose around the upstairs, creating a barrier with cardboard that Daisy managed to jump over but the kittens haven't tried to get past, and while the cats and kittens were clearly nervous and displeased to see each other, there were no attacks or hiding. So I am cautiously optimistic that everyone will learn to get along.

apaulled worked from home so we could continue to acclimate the kittens and we got haircuts together after lunch, plus went to the bank, CVS, and the food store (how romantic, I know!). We had the kittens in the big cage for a while watching Arrow and Nashville plus NOVA's "Making North America: Humans" (they were more interested in bobcats than in John Barrowman, and wound up back upstairs after meowing to protest their confinement). Harvest season at Longwood Gardens: 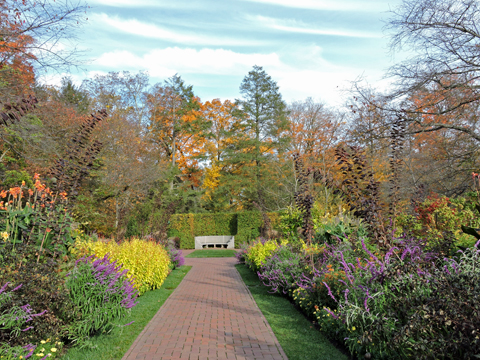