Thanksgiving is still a week away, but I can tell that it's going to be difficult because some members of my family are not speaking to other members -- they actually run out of the room when others show up -- while younger members show absolutely no respect to their elders and at times hiss and swat them for no good reason. The oldest family member wants nothing more than to hide down the basement, except she can't figure out how to open the baby gate, and the youngest has decided she owns the place and keeps stealing food off everyone else's dish.

In other words, we let the kittens run loose through two floors of the house today, since once they're down the stairs, there's no way to confine them to a particular room. (Thus far we have been able to use poster board to keep them out of the basement but that won't trick them for long.) Katniss has apparently decided to run for Alpha Cat and has been hissing at both Cinnamon and Daisy -- the former hissed back for the first time ever, while the latter growled and hid under the dining room table, spending much of the day looking miserable.

It rained all day, though it was unseasonably warm so we had the windows open. The kittens are very excited to see squirrels outside, and the chipmunks aren't hibernating yet -- nor are the crickets, who are still chirping as I type this! That is supposed to change this weekend, sadly. The kittens were reasonably impressed with Heroes Reborn, which I am very bummed to lose for a month and a half, but we were on the phone with my in-laws during Sleepy Hollow so I missed it, and we put the fiends to bed during Elementary. On Catoctin: 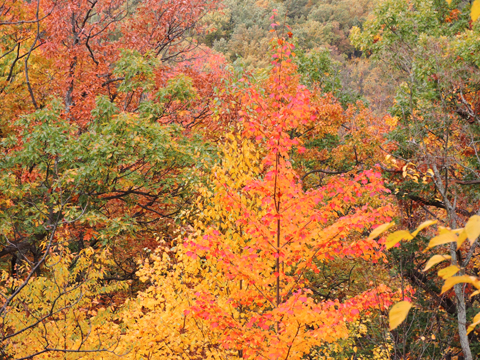