It should be obvious by now that for a couple of weeks this journal is mostly going to be family and kittens -- less family this year, since my sister's family isn't coming from New York for Thanksgiving because her daughters haven't been home since they left for college and Israel respectively at the end of the summer, but I have Daniel here now and Adam arriving in two days. Daniel is working remotely this week, so I went to Bagel City to get food for him and to CVS to get another blanket for kittens who like curling up on fuzzy fleece and we all had lunch together, including Paul who worked from home as well.

We watched two more episodes of The Man in the High Castle, which is terrific -- different from the book, which I don't remember in that much detail, but I often find Dick pretentious and misogynistic so I wasn't likely to be upset about changes anyway, and the characters are mostly complicated and interesting while the plot is really chilling (more interesting to me than Philip Roth's version). Tonight we got the Supergirl and Legends postponed because of the events in Paris, plus Minority Report which is building its arc wonderfully and it's so sad that the season finale will be the end! Summer at Huntley Meadows: 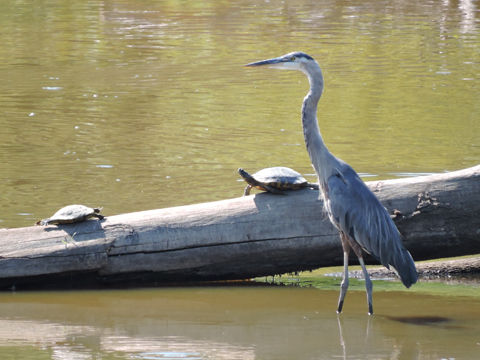