Mostly my day involved household chores, hanging out with Daniel (except when he was at lunch with my father, when I had lunch with Paul), playing with kittens who also got to play with some neighbors and friends, and finishing our binge-watch of The Man in the High Castle, which ended on, like, six cliffhangers so there better be another season, yet was entirely satisfying in almost every way besides. I'm not sure how much I can say without spoiling things but I ended up rooting for a character I would have sworn I couldn't root for to do anything except die, and for once I didn't feel manipulated by a love triangle. Tonight's Limitless ("Arm-ageddon") had lots of awesome, hilarious gimmicks and a genuinely surprising oh-no development, but was not even close to The Man in the High Castle. Here are some photos from last spring at Brookside Gardens when the azaleas were in full bloom: 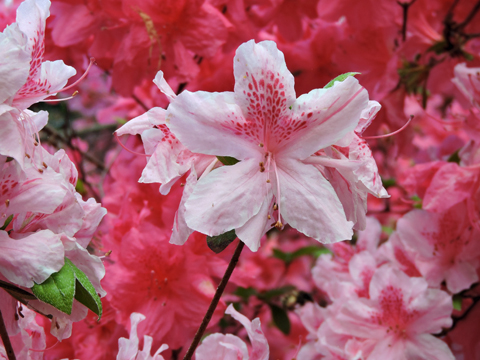