Paul and I both had to work in the morning -- I posted a review of Voyager's just-as-good-as-I-remembered "Dreadnought", both Adam and Daniel slept late -- then after lunch we drove Daniel to Baltimore to see friends from college and took Adam with us to the National Aquarium, since he hadn't been there since the new touch tanks opened. We got to see all the eels who are usually hiding and the puffins have babies! 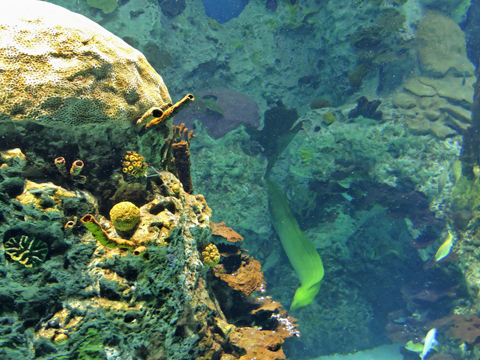 We went to Blu Bambu for stir fry and bubble tea, then we walked around the Inner Harbor to meet Daniel with his friends at the Kona Grill. It's been unseasonably warm and beautiful for November, a great night for a walk. When we came home, we finally watched last week's Doctor Who, which made me feel...nothing. I was telling a certain character to shut up already. I think I'm done with the show; I don't want to start to hate it.
Collapse