Regretfully, Thanksgiving weekend is over and both our sons have been redelivered to Seattle and College Park respectively. We took Daniel to the airport in the morning -- his flight wasn't until after noon, but we wanted to get him there plenty early given the holiday weekend and the weather reports around the country -- then we came home for lunch and hung out watching football with Adam while he worked on a computer science project. The kittens were content to snuggle him and his laptop in place of older son.

By some miracle, Washington beat the Giants -- Daniel even managed to watch the game via United's onboard wi-fi -- and Seattle won as well. We took Adam back to school in the afternoon once his laundry was dry, driving in the rain that continued pretty much all day. We had kittens wondering where everyone had gone all over us while we ate Ethiopian stew for dinner and watched Madam Secretary (how funny to see the leader of District 8 in such a subservient role, hee). Last day of cat pictures for a while, I promise! 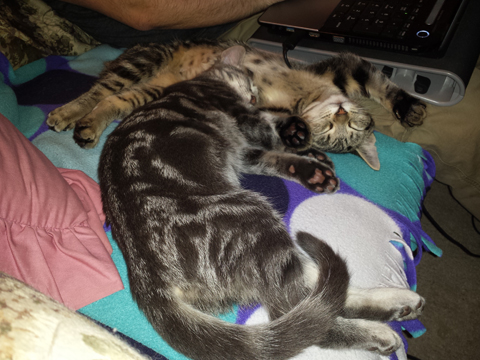