I had a fairly quiet day doing work and chore stuff, and I have had a trying evening, first paying a shiva call with Paul and my parents -- I saw a lot of people whom I care about very much, but it's very sad, especially for the children who have lost their grandmother over Chanukah -- then spending over an hour having online fights with representatives from Torrid and Amazon, a very minor inconvenience in the long run but they screwed up both my birthday presents and gifts I was trying to get for other people (Amazon was long-winded but ultimately very accommodating; I will never shop at Torrid again).

TV was not useful in helping me relax, in that the ending of Arrow was a cliched package of suckiness, and everyone on Nashville is still twelve years old plus full of gibbering stereotypes. So rather than belabor my bad mood, here are some photos of decorated trees from Winterthur's Yuletide, including one made from dried flowers grown on the estate, one decorated to reflect the March Bank, and one with Downton Abbey decorations and a feather duster: 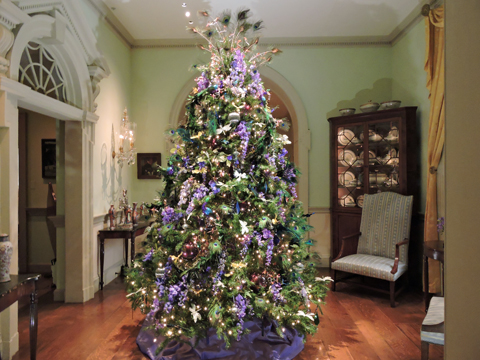