I spent a very nice day with Paul, Cheryl, and Robert, the latter of whom came to DC to see Kiss Me, Kate at the Shakespeare Theatre Company with Douglas Sills and Christine Sherrill. First we had lunch (quiche and stollen) with Adam, who was off to an all-night movie marathon with friends, then we went downtown, walked through the US Navy Memorial (see photos), and saw the show, which was terrific -- very high-energy, great dancing, great singing, lots of humor, generally a delight for a show whose lyrics I've known all my life!

We walked through the Downtown Holiday Market on the way back to the car -- lots of food, lots of crafts, enough of a crowd that we managed to behave and not buy anything -- then we drove back to the suburbs and went to Grand Fusion for dinner, where we mostly shared Chinese and Thai veggie food. After the Richmond friends went home, we watched the end of the Eagles-Cardinals game -- a great day except I just found out that Jeanne, a longtime friend whom I met at a Star Trek convention in the mid-1990s, died over the weekend. 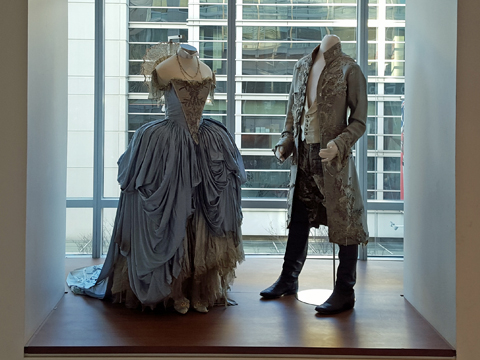